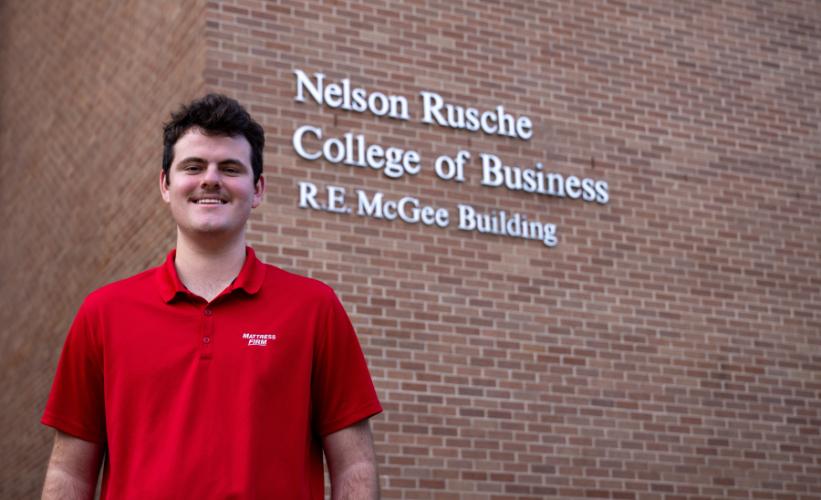 Nicholas Mobley, a junior from Tomball majoring in general business in Stephen F. Austin State University’s Rusche College of Business, works full time for Mattress Firm, which is reimbursing him for his tuition.

“Though the minimum age requirement for the job at Mattress Firm was 18 years old, the manager in the north Houston district, Patricia Bedoya, told me the self-paced video interview I sent was the best out of a hundred applications,” said Mobley, now an SFA junior.

After getting special permission from Human Resources to interview the 16-year-old, Bedoya hired Mobley to work under the Tomball store managers.

“A few months later, I started traveling to over 10 store locations in the north Houston district, from Tomball all the way to Huntsville, when I got out of high school each day,” Mobley said. “There were many days I would lead our district of more than 40 employees in sales as a teenager and part-time employee. This definitely ruffled some feathers among some of the full-time workers, but my managers loved it.”

When Mobley told Bedoya about his intention to continue with the company and attend SFA upon graduating from high school, she contacted her counterpart in Mattress Firm’s East Texas district at the time, Zahira Gonzalez, who graduated from SFA in 2007. Mattress Firm offers tuition reimbursement to any full-time employee who has worked for the company for at least one year, and Bedoya and Gonzalez found a way to extend that benefit to Mobley.

“Mattress Firm strongly believes in the continuing education and development of our associates, and tuition reimbursement is one way to show our people that we care about their growth,” Gonzalez said. “By truly caring and investing in our people, it allows us to retain the most talented individuals like Nicholas.”

Gonzalez, now a director of Mattress Firm’s events and exposition’s department, asked Mobley if he could handle moving from a part-time role to a full-time associate position called a sleep expert while attending SFA. Mobley said yes, and Mattress Firm began reimbursing him for his SFA tuition.

This required Mobley to take his classes online and drive to Mattress Firm stores in Lufkin, Longview and Tyler, as well as Shreveport/Bossier City, Louisiana. College of Business advisors worked with Mobley to make sure he stayed on track for graduation

“SFA’s College of Business is aware that students come to us from different walks of life, and the availability of online degree programs is a priority,” said Laurel Bleil, an academic advisor in the college. “Our goal is to help design specialized paths that lead students to graduation while balancing their academics, work and personal life. Nicholas has taken advantage of our online Bachelor of Business Administration degree in general business and is proof that you can be a successful student while serving as a full-time employee.”

Once again the youngest in his district, Mobley had to prove himself for a second time, commuting hours each day to fill in at district stores.

Balancing the full-time job with his new life as a college student — taking classes, living in Hall 14 and rushing the Tau Kappa Epsilon fraternity — was challenging for Mobley, but he made it work. So well, in fact, that he was hired for a new management trainee role over Mattress Firm showrooms in Nacogdoches and Lufkin and then was promoted a year later to the remote position of customer retention specialist.

“In my time at the store level, I sold well over a million in sales, got three other SFA students jobs and learned so many valuable sales skills and lessons I will use my entire career,” he said.

Mobley added that he intends to earn a Master of Business Administration from SFA.

“I want to pursue my MBA to further my career,” he said. “I feel like with my experience and a master’s degree, the sky is the limit.”

And when asked how he’s able to balance all his school activities and homework with a full-time job, Mobley said, “Luckily, I sleep on a Beautyrest Legend mattress from Mattress Firm, so I get a great night’s sleep when I have time to sleep.”

To learn more about SFA’s College of Business, visit sfasu.edu/cob.